Monday May 12th: Today US Soccer announced the preliminary 30-man roster for the World Cup in Brazil.  Two players from the San Jose Earthquakes are included in the US Men's National Team: defender Clarence Goodson, and forward Chris Wondolowski. From this list, a squad of 23 players must be chosen by June 2 for the final roster that will travel to Brazil. The USA's 23-player FIFA World Cup roster will be announced at a later date.

Clarence Goodson, 31, has been a mainstay of the USMNT, and no offensive slouch with five goals in 46 capped appearances for the USMNT.  The Earthquakes signed Goodson on June 28, 2013. He has made 16 appearances since joining the club, seven of which have been clean sheets. He recorded his first assist with the club in Saturday's 2-1 win against FC Dallas, a match in which the Earthquakes played a man down for the entire second half. 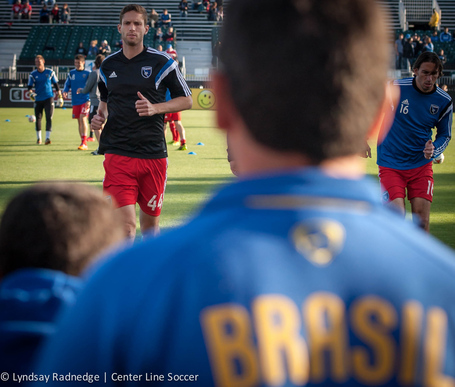 Chris Wondolowski's recent stats with the USMNT have been stellar, and include nine goals in his last 10 games dating back to his first national team tally against Guatemala on July 6, 2013.  Wondo has been in fine form this year, scoring both of the Americans' goals in a 2-0 win against South Korea at the StubHub Center on Feb. 1 and the second in a 2-2 draw against Mexico at University of Phoenix Stadium on April 2. He has the highest goals-per-game average since the beginning of 2013 at 0.81.

Wondo's inclusion will surely energize the supporters of the #Wondo4Brazil campaign - they will continue their efforts to support Wondo's bid to make the final 23-man roster that boards the flight to Brazil.  Pledge your support and download your button here.

Both players will have a short commute to training camp at Stanford University when the squad reports for duty this week.  Earthquakes fans will be able to see their local heroes in the match against Azerbaijan, to be held at Candlestick Park, Tuesday May 27.  Subsequent matches include two games in June against Turkey (June 1st; Harrison NJ) and Nigeria (June 7th; Jacksonville, FL).