Ever since Chris Wondolowski found his scoring touch for the U.S. men's national team, a small, but determined, cadre of Quakes fans has pushed for his inclusion in the 23-man World Cup roster. They call their campaign #Wondo4Brazil

Sure, as the most in-form striker in the U.S. men's national team forward pool, Chris Wondolowski should be assured a spot in Jurgen Klinsmann's 23-man 2014 FIFA World Cup roster. However, that certainty is anything but, as Wondo doesn't "move the needle" like some of his competition at striker, notably the always dependable Landon Donovan and Clint Dempsey, the next-big-things Jozy Altidore and Aron Johannsson, and the new-kid-on-the-block Terrence Boyd.

Instead, all Wondolowski does is score goals. Lots of goals. 84 goals across all competitions since the conclusion of the 2010 World Cup. Nine goals in his last 10 U.S. national team appearances. He even scored against CONCACAF villain Mexico. Quite simply: Wondo scores goals.

And now, across social media, Wondo's biggest fans are jumping aboard the #Wondo4Brazil bandwagon. Fans are creating some tremendous tributes to their hero. Local celebrities and sports stars are getting behind the cause. Even Jurgen Klinsmann himself -- the very man that will decide whether or not Wondo goes to Brazil -- has called him "one of those drivers" at the upcoming pre-World Cup camp. The polls are definitely in Wondo's favor.

But the campaign is far from over. Klinsmann and his staff have until June 2 to submit the final U.S. 23-man roster to FIFA. Wondolowski has exactly 20 days to make his case -- strengthen his case -- and secure a Brazilian adventure. He will, without a doubt, do everything he can on the field to ensure that that happens. It is up to everyone else to keep the momentum going.

So what are you waiting for? 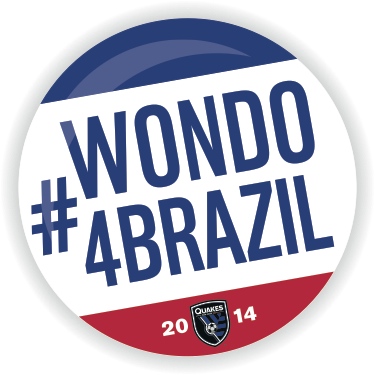