The chance to play in the English Premier league is up for grabs as Derby County FC take on Queens Park Rangers at Wembley Stadium on Saturday.

Prior to the first round playoff games, Dawkins spoke to the Derby Telegraph about how he was using the playoff experience he gained in MLS with the 2012 Supporters' Shield winning Quakes squad.

The Earthquakes faced David Beckham's LA Galaxy in a play-off semi-final, which they lost at home 3-2 on aggregate, despite coming away with a 1-0 victory in LA who then went on to win the 2012 MLS Cup.  "I was involved in the play-offs during my time in the MLS," said Dawkins. "On that occasion, we lost to LA in the semi-finals.  This time, I'm not going to let that happen again." 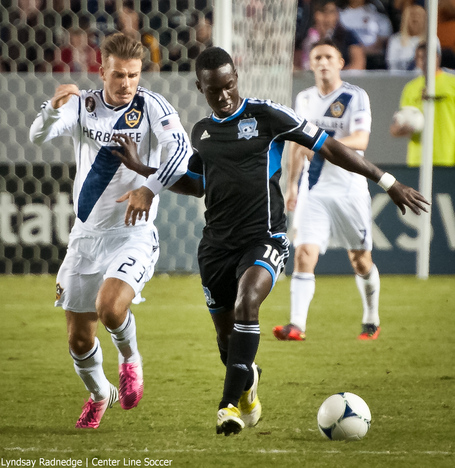 It remains to be seen if Dawkins will get the start or remain on the bench - according to team captain Shaun Barker, Simon "Thighs" Dawkins is "a very talented player, very quick and it is only the fine form of Jamie Ward and Johnny Russell that has kept him out recently. He has made an impact whether starting games or coming off the bench."

The former Tottenham Hotspur player grew in London; in fact, his parents grew up in Wembley, the venue for the playoff final.  Dawkins has never been to the stadium, even as a fan, so playing in front of family and friends for the chance to play in the Premier League would surely be a dream come true.

Watch the Championship promotion playoff final on BEIN Sports, at 6:55 AM on Saturday, May 24th.