The Earthquakes (2-4-4, 10 points) play host to the Dynamo (5-6-2, 17 points) at Buck Shaw Stadium Sunday night. Both teams are missing two players each due to World Cup call-ups.

SANTA CLARA, Calif. -- Ten games into the season, the San Jose Earthquakes have earned 10 points and sit tied for last in the Western Conference -- seven points off the playoff positions, but with a game in hand. So, with a two game road trip on the horizon, the Quakes host the Houston Dynamo on Sunday night at Buck Shaw Stadium, desperate to earn their third win of the season.

After helplessly watching an Obafemi Martins far post volley arc over his head and settle into the back of the net last weekend in Seattle -- the only goal in a 1-0 win for the Sounders -- Busch knows just how important tonight's game against the Dynamo is to the Quakes. His coach, Mark Watson, also shares that sense of urgency, and promises that his squad will take a different tactical approach now they are back in the friendly confines of The Buck.

"We will approach the game trying to take it to them with our energy and speed and be dynamic going forward," said Watson at the conclusion of Friday's training session. "You look at the dynamics of playing home or away, you always try to take the game to the other team when you are home. You need to take advantage of your home games."

While winless on the road, the Earthquakes do sport a 2-1-3 record at home, where they benefit from a consistently sold-out stadium of fans and supporters. What the team will not have available are World Cup players Chris Wondolowski and Victor Bernardez. Losing two of the squad's most important players is certainly a blow, but it is tempered by the fact that center back Clarence Goodson is expected to be available for selection against the Dynamo.

"We know it's going to be a tough game," said Watson. "They are good team, and they still have a lot of quality in the team even though they are also depleted due to the World Cup. They are missing a few key guys, but they have a good squad."

Houston arrives in San Jose without the services of captain Brad Davis and midfield playmaker Boniek Garcia. The Dynamo played midweek against DC United, suffering a 2-0 loss -- their fourth road loss of the season. Houston has won the last three meetings against San Jose, including a controversial 1-0 victory at AT&T Park in San Francisco near the start of the 2012 season.

"They will come in with quality and a lot of fight," said Watson. "It's not going to be an easy game, and if we don't match them on a bunch of different levels right from the start, it could be a long night for us."

The Earthquakes did receive some good news this week, as Shea Salinas is eligible to play after sitting out a one-game suspension and Steven Lenhart trained fully and is available for selection for the first time since injuring his knee earlier this season. Along with Goodson, the three first team selections could be back in the starting eleven against Houston.

The one wildcard on the injury front is Portuguese midfielder Yannick Djalo, who hasn't featured for the Quakes since coming out of San Jose's match at the Vancouver Whitecaps earlier this month. The Earthquakes training staff has been working overtime to help Djalo regain fitness, but the process has been a bit unorthodox and his availability this weekend is still in doubt.

"Yannick Djalo trained all this week," said Watson. "We are being a bit more diligent in how we work with him and on the plan to get him fully fit. We've had to do things a little bit differently in terms of giving him more high-tempo game-like situations. We've tried to replicate those more in his rehabilitation process. He's come through great."

Whether or not Djalo makes the 18-man roster for tonight's match will not be known until pregame warm-ups, but to a man the Earthquakes have only one concern ahead of them: How to stop Dominic Kinnear's disciplined Dynamo team.

"It's going to be a battle," said Busch. "They're a good team. Dom always has them organized and they are tough to break down. They are a physical team, we know that. We always have good battles with them and Sunday will be no different. We've got to make sure we are ready to play and battle for 90 minutes." 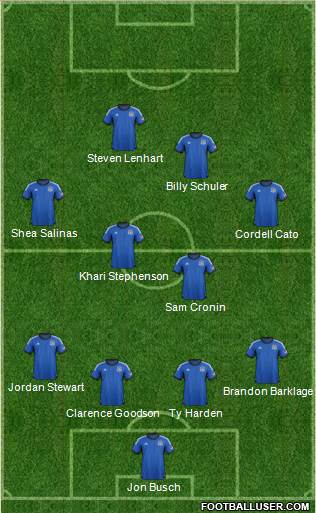