Today's episode of Center Line Soccer is brought to you by Cal Ripken Jr., the letter 'W' and the number '8'. *** A couple of years ago, it looked like local hero Chris Wondolowski might be lured away from the San Jose Earthquakes. Nerdy Gales re-visits an article where the similarities between Wondo and lifelong Baltimore Oriole Cal Ripken Jr. provided some hope for the then rookie blogger; perhaps Wondo would be a lifelong Earthquake too. Now, our Wondo has been taken away, to paraphrase the Quakes fans' chant. The good news is that he's part of the 23-man roster chosen by Jürgen Klinsmann to compete for the 2014 World Cup in Brazil.

Ask any San Jose Earthquakes fan to name a ball player at the top of his game, with the number eight on his uniform and was an all-star with golden trophies, and they'd surely name their team's star forward Chris Wondolowski.  Mention also that his father and younger brother both coached the game, that he was a local hero getting ready to play in a new stadium, and that in his down time he loved to hit the hardwood court for a little basketball, they'd reach for their wallet and place their bet confidently on Wondo.

Not so fast.  I just shared the life and storied career of baseball hall of famer Cal Ripken Jr., all-star infielder who played his entire career with the Baltimore Orioles.  All of the facts I listed above are true for both men.  And yes, for the purposes of my argument, I have chosen to ignore (and forgive) Chris's brief excursion to Houston. The 2005 ‘team kidnapping' doesn't count - technically he was temporarily a ‘zombie' Quake.

Here are eight similarities between the two local heroes; their lives have many parallels and they both include World Series baseball and World Cup soccer.

I learned all about Cal Ripken Jr. when I lived in Baltimore during the most productive seasons of his career.  Fresh off the plane at BWI airport  in 1990, I didn't fully appreciate that I had arrived at such a pivotal moment in Charm City's sporting history - ground had just been broken at Camden Yards, and the indefatigable Cal was in the midst of his record breaking consecutive game streak.

A couple of years later, the stadium opened on April 6, 1992, hot on the heels of Cal's 1991 Gold Glove winning and MVP season.  Does that scenario sound familiar - golden trophy, new stadium?  I moved to California in 1997, just as Cal took his number eight jersey from short to third base,

Meanwhile, during that same summer of ‘97, a teenager from Danville was winning his own baseball championship. Fourteen year old Chris Wondolowski, himself an outstanding middle infielder, started at second base for the Danville Rockies baseball team that won the 1997 PONY League World Series.  Cal Ripken Jr. won his World Series ring in his rookie year of 1983.

Cal's younger brother Bill played second base for seven years while Cal played shortstop - Chris and Steve both played for the Houston Dynamo from 2007 to 2009.  Cal Ripken Sr. managed Cal Jr. and Bill as Orioles (still the only time a father has ever simultaneously managed two sons in MLB) - John Wondolowski coached son Chris from U9 to age 14.

Both the Ripken and Wondolowski patriarchs have handed down their coaching skills to their sons:  John Wondolowski is currently Head Assistant Coach for soccer at San Ramon Valley High School, where he is assisted by Steve. Steve and Chris have already coached together: a freshman team at SRVHS and a competitive girls' team while they were in Houston.

Steve is now coaching with the Earthquakes Academy and says of Chris "He's been doing camps for years and years and I see him jumping right in with an academy".  Bill Ripken, with Cal, is an established baseball instructor in their Ripken Baseball academy - if history repeats itself, then a Wondolowski Soccer academy will surely follow.

Cal Ripken Jr. acquired the number eight on his very first day as a major leaguer, when it was assigned by the club house manager.  Cal didn't mind, "the number made no difference to me.  I just wanted a big league jersey with any number at all".  Chris, on the other hand, always wanted the number eight since his U9 days.

Chris's longtime quest for the number eight jersey was stymied when he turned professional.  In Houston he had to play at number seven, coincidentally the number worn by Cal Ripken Sr., and then Cal's brother Bill in Baltimore.  In 2009, when Chris was traded back to San Jose, number eight was already assigned, so he took his father's college number seventeen, the digits of which add up to eight.  Incidentally John Wondolowski  played at ‘Cal' (where else?).

Chris grabbed his favorite number eight back in 2010, and of course scored his way to the Golden Boot that season - it seems highly unlikely Chris will ever give up the number eight again.  Going to Brazil, with the USMNT roster now finalized, Chris is hoping to continue his octo-mojo by wearing number 18; number 8 is already taken by Clint Dempsey. 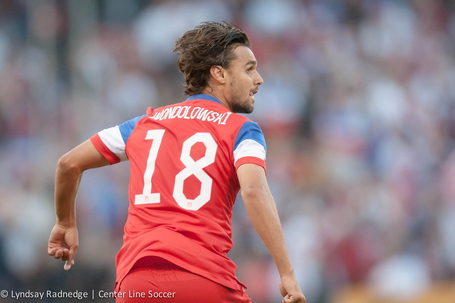 Ever since Wondolowski scored a hat trick for the US Men's National Team wearing a misspelled shirt - Wondowlowski - the superstitious striker has had an extra ‘W' sewn into the inside collar of his jersey for good luck. Chris has other superstitions: he always puts his kit on in the same order, and there's a rumor that he's not getting a hair cut until after the World Cup.

Cal Ripken Jr. only had one superstition, but it was a streak-long superstition, which he described on NPR's wait wait... don't tell me:

'You know, some people didn't launder their shirt or their underwear and all that kind of stuff in all the time they played, for superstitions. I didn't do that. But there was one piece of equipment I wore the whole time for the whole streak. It was a metal cup that protected...the most important part.  My dad, it is kind of weird, and this is true, is that, you know, when we went away from home, dad kind of brought me down and gave me an Oriole bag and then presented me with the cup and said, you know...Welcome to manhood."

Chris Wondolowski grew up in Danville, CA, just 35 miles from the future epicenter of Earthquakes soccer.  Off the field he already conducts himself with the same affable, unselfishness as Ripken.  He has a strong sense of community spirit, recognized by his nomination for MLS W.O.R.K.S Humanitarian of the Year for his work with Street Soccer USA.

After each home game, drenched in sweat, he jogs over to commune with the 1906 Ultras (almost as sweaty after a close game) - he then circles the pitch, patiently signing autographs for any fan that wants one.  The countless numbers of small hands thrusting last season's Wondo bobble head, or their favorite picture through the rails for Chris to sign after the game show me that he also has the heart of the younger Quakes fans - just as Ripken had in Baltimore.

Cal grew up in nearby Aberdeen, MD - just 35 miles from the epicenter of Baltimore baseball - and remained loyal to its team his whole career.  There's a fair chance that if you call out ‘Hey Cal' in Baltimore's Inner Harbor, approximately twelve teenage boys, all sons of Ripken fans, will look up from their crab cake sandwiches.

Cal Ripken Jr. was the franchise player when the Baltimore Orioles crossed town from a decrepit football (the throw-ball kind) stadium to the purpose-built brick edifice of Camden Yards.

Earthquakes fans are looking forward to seeing another number eight inaugurate their new ball field in 2015. Chris Wondolowski is someone around whom the Earthquakes continue to build the franchise as we prepare to cross the Caltrain tracks to the new Earthquakes stadium.

Cal Ripken Jr. chose to stay in Baltimore for his entire career, presumably declining lucrative offers from larger market teams.  Everyone hopes Chris will do the same in San Jose, and hopefully he will retire in a Quakes jersey, and another number eight jersey will be hung from the rafters of the new stadium.

It turns out that both players gravitated towards basketball as their favorite sport outside their chosen profession - Wondo's MLS biography states "If not playing soccer, he would play basketball because it has a lot of similarities to soccer", while Cal plays basketball avidly enough to have built his own court beside his house.

In my book, the Ripkens win at softball, the Wondolowskis win at soccer - the basketball outcome, like the US team's World Cup future, is still up in the air.

Here's the final kicker (as it were) - and this is when I got a little freaked out by the sudden apparition of The Twilight Zone theme in my head - the Ripkens love soccer.  In Cal Jr's autobiography The Only Way I Know, he described how Cal Senior actually knew more about him as a teenage soccer player than as a baseball player - "Soccer was the winter game for both of us".

Cal Ripken Sr. loved the game and loved to coach the game "During the World Cup, especially, it [was] easy to get Senior to analyze the play of the midfielders with exactly the same precision and passion with which he analyze[d] center fielders".

One of the Earthquakes fans favorite chants is sung to the tune of You Are My Sunshine: "You are my Wondo, My only Wondo, You make me happy, When skies are grey, You'll never know Chris, How much we love you, Please don't take my Wondo away". Well, our Wondo has been taken away, but nobody minds.  It's temporary.

So, here we all are on the brink of Team USA's first game of the 2014 World Cup in rain-drenched Natal on Monday.  There are tons of questions racing through my brain:  How will the USMNT perform in Brazil?  Will Wondo get any starts? Will Wondo get any playing time?  Only the Magic Eight Ball knows the answer - I shake it vigorously, wait and see it shows: "Ask Again Later".

The anticipation is building - I'll ask again on Monday when USA faces Ghana in Natal, with kick off at 3 PM PT (ESPN).