This Quakes Week: From San Jose to Brazil via the 17th hole at Sawgrass, FL.

A round up of the week's news from the plush new Center Line Soccer office complex surrounding the San Jose Earthquakes epicenter.

Share All sharing options for: This Quakes Week: From San Jose to Brazil via the 17th hole at Sawgrass, FL.

The San Jose Earthquakes (4-4-4) are coming off a much needed away victory over FC Dallas last weekend - the 2-1 victory was ignited with the Jean Baptiste Pierazzi's golazo from forty yards out - it's not too late to vote it MLS Goal of the Week; you have until midnight Thursday.  The squad departed Thursday for their third trip Up North to Canada, and hope to repeat with a victory over Toronto FC (5-4-1), who are missing Michael Bradley on World Cup duty with the US Mens National Team.  Kick off from BMO Field, Toronto, is at 1 PM PDT on Saturday, June 7, with TV coverage on CSNCA, and radio on 1370 KZSF and 1590 KLIV.

Over in Palo Alto, as the USMNT training decamped, Bay Area focus has shifted to the upcoming LA Galaxy game. 35,000 tickets have already been sold to the annual Stanford game.  There are always fireworks at this game - both on and off the field - and this annual July 4th holiday weekend tradition has provided some of the more memorable games on the Earthquakes schedule. San Jose Earthquakes vs. LA Galaxy kicks of at Stanford Stadium at 7:30 PM on Saturday, June 28th with post game pyrotechnics 15 minutes after the match. 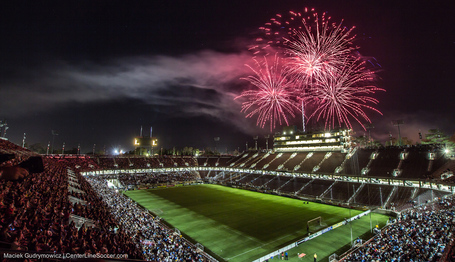 Stanford Stadium is 16.2 miles to the the new Earthquakes stadium at 1145 Coleman Avenue, San Jose. This distance is worth knowing if you plan on posting your picture for the new Earthquakes contest #MilesToTheEpiCenter.  Fans can download a poster to photograph at various world-wide locations showing the number of miles to the new stadium.  Of course, the plush, new Center Line Soccer office complex is zero #MilesToTheEpiCenter, since the center line runs right through the middle of the field.  In fact, you can't get closer to the epicenter without stretching the space-time soccer continuum! Hmm: EpiCenter Line Soccer.

Talking of the World Cup - we weren't but let's start now - the Earthquakes forward Chris Wondolowski is on his way to Brazil with stop offs in New York and Florida.  A few of the players took a break from the intensive preparations with a visit to the 17th hole at Sawgrass - for those who know, the 17th is  a challenging water shot, and cost Wondo two balls today:

Very disappointed that I put 2 balls in the water @TPCSawgrass. Such a fun hole and thank you for having us out. #alotharderthanitlooks

It seems that many of the the Wondolowski family will be traveling to see Chris play in Brazil - brother Steven (@SJWondolowski) is an old hand on Twitter, and will grab a couple of weeks over there before he resumes his Quakes Academy duties.  Recently the dry wit of father John (@JWondo) has surfaced in the Twitter verse:

He promises to keep us all abreast of World Cup Wondo with his "genius observations".  Daughter Emersyn might be a better dribbler than Chris, but her fingers are still too small to Tweet.  In the meantime @LinzWondo will have to press the smartphone keys with Emi's reviews of Brazilian baby headbands. 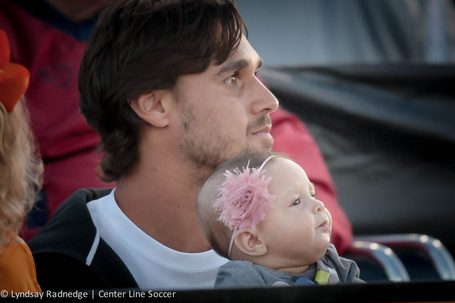 The last game for the USMNT Send Off Series will be Saturday night in Jacksonville against Nigeria (3 PM PDT ESPN).  After that it's off to Brazil for their first game against nemesis Ghana in Natal on June 16 (3 PM EDT, ESPN).

Meanwhile, former Earthquakes defender, and San Jose native Steven Beitashour is also on his way to Brazil with the Iran national team.   Beita's journey to Brazil has been captured in great detail on the Vancouver Whitecaps web page, and it's well worth the read.   He is "excited to officially be wearing #20 at this years World Cup!".  We miss his smile and wish him well on his next exciting journey.

And finally, with the 2014 World Cup just one week away, SB Nation meets all your World Cup needs with their 2014 World Cup Preview page. If you want to read about ridiculous opening ceremonies. the best and the worst of World Cup kits, or just need a beginner's guide, then SB Nation has you covered.