Nerdy Gales inks in the details of reasons Earthquakes players and fans choose their tattoos, and noticed that they mirror the club's new motto that was unveiled at the start of the 2014 season: Unity. Devotion. Heritage.

Share All sharing options for: Inking In Earthquakes Unity, Devotion and Heritage.

I've often wondered about tattoo designs, what they mean and what they might tell you about their owners.  Tattoos have been around for thousands of years, originating in the Polynesian islands;  the word itself derived from the Tahitian word ‘tatu'.  In the past few decades, tattoos have seen a meteoric rise in popularity and have become part of the cultural mainstream, perhaps even mandatory in certain artistic circles.  Many actors, musicians and soccer players, have made them fashionable - the ultimate (and permanent) fashion statement: "My body is my journal, and my tattoos are my story" said actor Johnny Depp.

Tattoos are a conscious and indelible decision to change your appearance, and I wanted to find out why some of the Earthquakes players and fans chose to wear them - what did they think about when they inked?  Not one of them undertook their decision lightly, and a great deal of thought went into their design - there's no going back on a tattoo that in a few years might become just an ink blot on your body.

Everyone I spoke with related a different reason behind his tattoo, and as I inked in the details of tattoos they chose, I discovered that they could be broadly categorized according to the San Jose Earthquakes new motto, unveiled at the start of the 2014 season: Unity. Devotion. Heritage.

A warrior's tattoo, a message for himself and his comrades as they enter the field of battle together.

Jordan Stewart is probably the most fashionable member of the Earthquakes team (are there fashionistos?).  The left back has his own clothing line, set up in partnership with fellow Englishman Joleon Lescott: Lescott Stewart.  Jordan Stewart is a big tattoo fan and has several, though most are normally hidden from view.  While many players go with whole arm ‘sleeve' tattoos he prefers to keep them behind his T-shirts.  "I like tattoos, but there are not many you can see on me."

I hadn't noticed Stewart's tattoos until an autograph session after an open training session; his sleeveless training top revealed a tome around his left bicep, which reads: "Victorious warriors win first then go to war, while defeated warriors go to war first then seek to win." 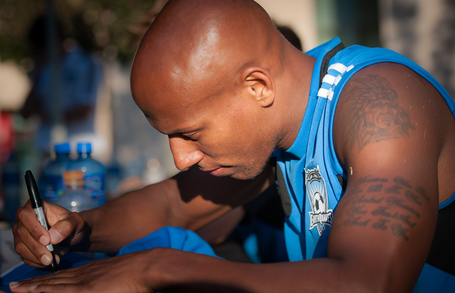 It's a quote from chapter four of  "The Art of War, written in the fifth century BC by Chinese general and military strategist Sun Tzu.  Not surprisingly this chapter would resonate with a defender, discussing tactical positioning, and defending existing positions - a military analogy for team unity, described by Stewart thus: "Before you go and do something, in your mindset, you have to make sure you give 100%.  When I go on the field I want three points and I make sure I turn up for the team".

Stewart has another motivational tattoo: "I have another on my back that says: "Without struggle comes no progress". This tattoo was inked back in the UK "about three years ago, from a guy called Louis who did Beckham's guardian angel tattoo". Stewart has an keen eye for style and if you are going to submit your trust to a tattoo artist you would choose the same one as David Beckham - the ultimate paradigm of the tattooed soccer player.

Tattoos commemorative of life events - ever-present reminders of those people that are important to the wearer.

Alan Gordon has tattoos that represent very personal reasons, and which commemorate friends and family milestones.  Tattooed on the inside of his upper right arm, there is a tattoo with the initials JZ and 84-02 across the number 4.

"This one here on my bicep is a tattoo I got when a good friend of mine in college passed away: Joe Zaher.  He was a teammate of mine at Oregon State, and we got really close, and I just felt like I wanted to remember him.  I dedicated my career before I turned pro - I didn't know I was going to turn pro.  He was definitely a better soccer player than I was, and I just made a promise that I was going to dedicate my career to him." 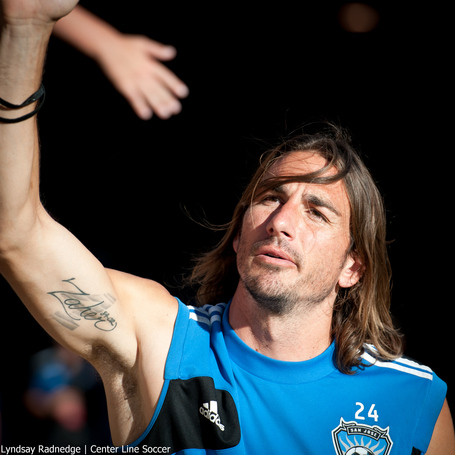 Joe Zaher lived from 1984 to 2002 when he died from complications from surgery after a car crash; Quakes fans will remember Joe's brother Mike, who played for the Earthquakes in 2009.  Asked why he decided on a tattoo to commemorate his friend Gordon replied: "Just because you see it every day, and it helps you remember. Not that you would forget, but it's a constant reminder of what that person means to you, and you see it on a daily basis, so there's never a day that he doesn't pop into my mind..." he paused, "...which is a good thing." 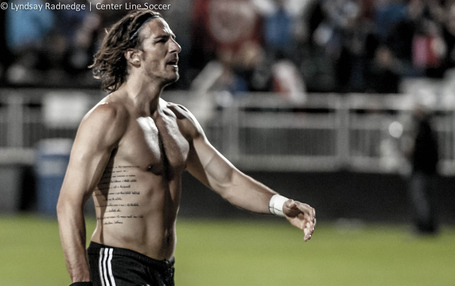 Alan Gordon also has a tome on his right side that you can catch sight of after game winning goals against the LA Galaxy: "It's a wedding prayer.  My wife grew up in Hawai'i and we got married in Hawai'i so a few years back we were out there renewing our vows, 3 or 4 years after we got married.  During our ceremony the pastor was saying this in Hawaiian, and I was looking through some art [later] and I found the prayer that he was saying.  I thought it was special to us, and it's a good thing to remember as well.  And it's close to my heart."

Bloodline transmitted from the past or culture handed down by tradition.

Chris Wondolowski also has two tattoos: the first is on his upper left arm with a Superman like logo with the S replaced with the letter W.  Above the W are four initials, three for each of the Wondolowski brothers, Chris, Matt Steven and the fourth initial of their dad John. 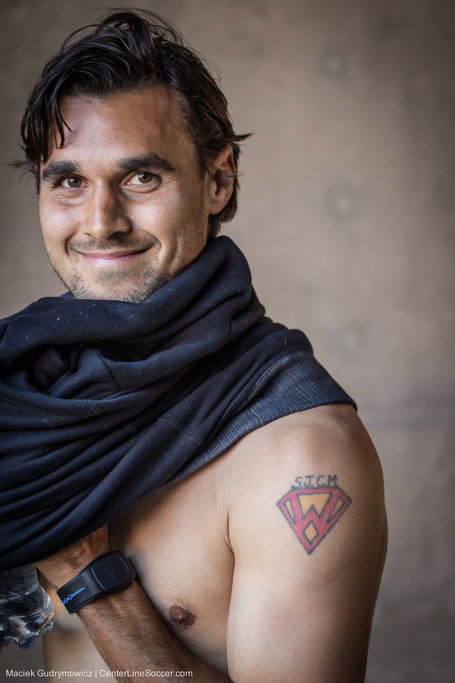 The second tattoo is a dream catcher design on his right rib cage, beneath his Kiowa name ‘Bau Daigh' - which means Warrior Coming Over The Hill.  Why did Chris decide on a tattoo to share his family's heritage?  "It means a lot to me, it's my [Kiowa] name - and I like the design and I wanted it to be a part of me.  It's my name, and it comes up in conversation when they see it so I can explain it to people." 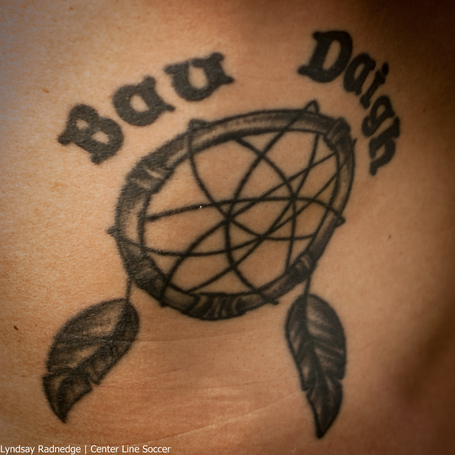 The dream catcher tattoo was inked in 2007, and both tattoos reveal his family's heritage: "This side [the W on his left arm] represents my dad and my brothers; the arm has my brothers and my dad's initials over the W.  This side  [the dream catcher] is my mom's side, because she's Native American.  The one with initials on the W - we all have the exact same one over here, so [both tattoos together] are kind of the yin and the yang".

Of course, Chris now has even more superstition wrapped that letter 'W', ever since the kit man of the USMNT accidentally misspelled "Wondowlowski" on his jersey - the same day he scored a hat trick.  Ever since that game, there's been an extra W sewn inside the collar of Chris's jersey, a tradition that will be carried on during his trip to the 2014 World Cup in Brazil.

Brando Erazo is one of the more devoted fans that travel to away Earthquakes games and USMNT games.  He embodies, quite literally, the unity, devotion and heritage among Earthquakes fans.  Brando's even watched the Earthquakes practice on a rain sodden field in north London, on their trip to Tottenham Hotspur's training facility a couple of years ago.

I've never been to a game that Brando hasn't been at, and sure enough I bumped into him at the preseason game against the LA Galaxy in Fresno, where he showed me the latest addition to his collection - an as yet incomplete tattoo of the new Earthquakes logo.  The location of the newest tattoo is in the same location, the right rib cage, as Wondo's dream catcher.  Since Chris wasn't playing in Fresno that night, he was hanging out with the fans and gave Brando some grief about its location: "You gotta be original man!". 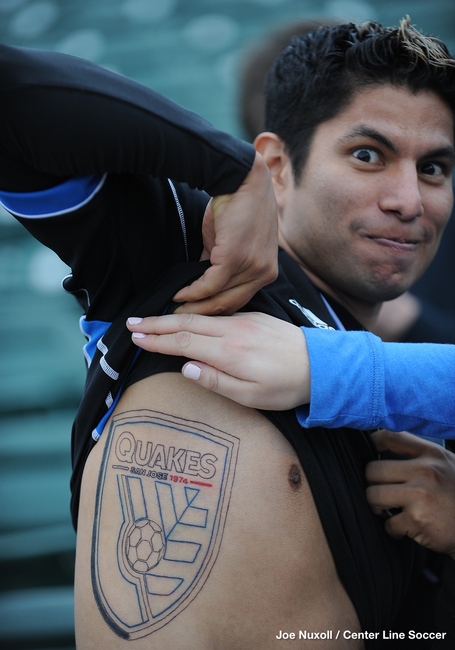 Brando has three tattoos: "I like tattoos but I'm honestly not a tattoo guy. They really aren't for me (ironic as that sounds). I literally love this club so much, that's why I do it."

The three tattoos continue to be a work in progress, "I got my first one a couple of years ago (the 2001-2005 logo), the second one I got about 6 months ago (the 74 logo) and the newest one I got about a week and a half ago.  The new tattoo will be done in a few weeks...I just have to let it heal and set the appointment date." 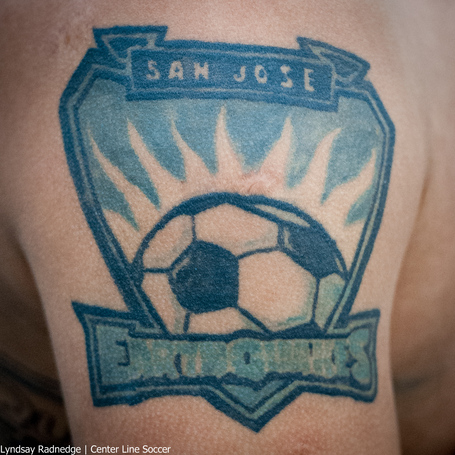 His decision to represent his devotion with a tattoo was because "my love for this team is permanent.  I also try to wear something Earthquakes every day of my life, so this kinda makes it easier."

The diversity of tattoo designs chosen by each of the interviewees was as diverse as each reason behind their decision to tattoo their body.  The unity of a player with his team mates, devotion to dear friends and family and cultural heritage of a warrior.  Jack London was right:  "Show me a man with a tattoo and I'll show you a man with an interesting past."

My grateful thanks to everyone who participated.  Photo credits to Maciek Gudrymowicz, Joe Nuxoll and Lyndsay Radnedge of Center Line Soccer.