Djalo is eager to get back on the field for the Quakes, but the training staff plans to be cautious with the injury-prone forward.

An hour into the game, as his shot sailed wide of the target and into the Levi's Stadium crowd, Yannick Djalo fell prone to the ground in front of the Seattle Sounders goal. The dynamic forward, who had given the San Jose Earthquakes a 1-0 lead just before the stroke of halftime, had a grimace on his face not of disappointment at the missed scoring opportunity, but of pain from his troublesome quadriceps. Not again, told his expression.

Djalo received treatment on the field and on the sideline, but he could not continue and was replaced in the lineup by Khari Stephenson. The Quakes held on for a vital 1-0 win over the Sounders in front of nearly 50,000 in the debut of Levi's Stadium, but head coach Mark Watson revealed in his post game press conference that Djalo had suffered a mild quad strain.

The MLS Player of the Week prior to his injury, Djalo made way in the starting line-up for newcomer Matias Perez Garcia for the Quakes match at the LA Galaxy. The Designated Player scored on his debut, a MLS Goal of the Week worthy strike, as San Jose held on for a 2-2 draw against the Galaxy. Djalo did not make the trip to LA as he worked on rehabilitating his injury.

When the Earthquakes resumed training earlier this week, Djalo was still focused on receiving treatment. Watson told reporters on Tuesday that Djalo saw himself ready to return to action, but that the medical staff was not ready to pronounce him healthy. Watson indicated that Djalo would likely miss at least one more week of action. A club spokesperson said that Djalo would be listed as "Questionable" for Saturday's match against FC Dallas.

Without Djalo, Watson is likely to play the same starting eleven that faced the Galaxy last Friday. Perez Garcia, who was expected to play more as a midfielder for the Quakes, would start along with Chris Wondolowski at forward. Atiba Harris, the incumbent right midfielder will stay in that position, but may move to the bench when Djalo is healthy enough to play. The on-loan from Benfica striker would then assume his place as Wondo's forward partner and Perez Garcia would slide into the right winger role. 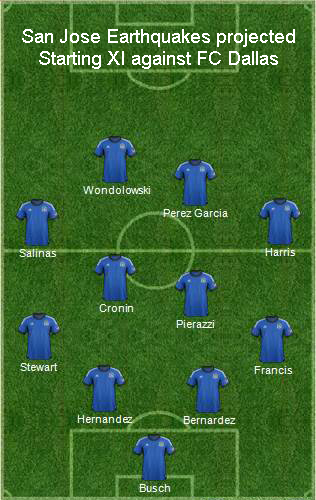 The Earthquakes have only 14 games remaining this season, including just 5 games at home, with which to catch up to the Western Conference top-five. A victory against FC Dallas this weekend is vital to the Quakes' hopes of qualifying for the postseason, but it looks likely that they will have to achieve it without the services of Djalo.