The last time the Quakes visited Seattle, they only dressed 16 players. It won't be as bad this time around, but who Watson starts is still a mystery.

With news that Designated Player Matias Perez Garcia will be out for tonight's game against the Seattle Sounders following surgery to repair a torn meniscus, who will San Jose Earthquakes head coach Mark Watson employ when his injury-ravaged team takes to the plastic turf at CenturyLink Field?

Steven Lenhart is still out, and probably will be for at least another month. Injury-prone forward Yannick Djalo has been pushing to get back in the lineup, but he is not available for tonight's match. And, of course, Alan Gordon, the former heart and soul of the locker room, has been traded away to the LA Galaxy.

And that is just the missing persons list at forward.

Clarence Goodson is out until October at the earliest, and Shaun Francis will sit for an unspecified amount of time after suffering a leg injury early in last Saturday's 5-0 blowout loss to FC Dallas. No wonder the Earthquakes have recalled JJ Koval, Adam Jahn, and Tommy Thompson from loan at USL Pro playoffs-bound Sacramento Republic FC.

Back on May 17, when the Quakes traveled to Seattle to play the Sounders, the team faced a similar player shortage. The team dressed only 16 players against the Western Conference leaders, which didn't include World Cup training camp participants Goodson, Chris Wondolowski, and Victor Bernardez, and narrowly lost 1-0 on an Obafemi Martins wonder-goal. The Starting XI that day looked like this: 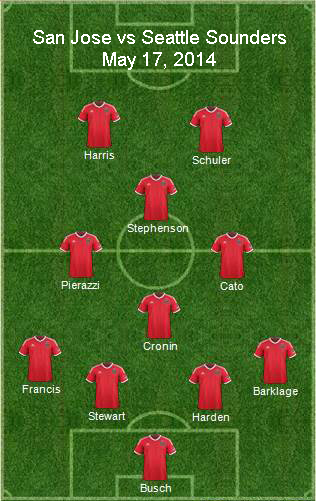 Fast forward to today, and coach Watson will again have to be creative in naming his starting lineup. As he did in May, Watson will have Billy Schuler and Jahn available tonight and could pair either with Wondolowski at forward. But to do so changes tactically what the team has been trying to do over the past four or five games: attack with a ground-based possession game.

With Perez Garcia out, and Djalo too, the time is right for rookie Tommy Thompson to earn his first MLS start. He was very active as a second forward in 18 minutes against FC Dallas last Saturday, partnering with Wondolowski up top and nearly creating a goal out of nothing with an acrobatic display. Thompson has been tabbed as the future for the Quakes, a player that Watson wants to see better round out his game, but the 19-year-old may need to be their present. 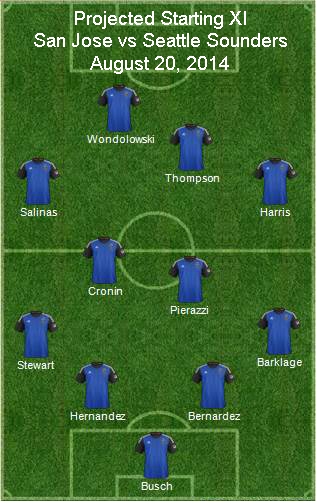 How would you put together a Starting XI to face the Seattle Sounders tonight? Please share your ideas and lineups in the comments below.