Just as the Quakes offense was starting to click, Yannick Djalo, game winning goal scorer against Seattle and last week's MLS Player of the Week, has suffered an apparent quad strain. Who replaces the dynamic forward in San Jose's starting eleven?

The San Jose Earthquakes are not the first team in MLS to suffer untimely injuries, but the sight of Yannick Djalo lying prone on the Levi's Stadium pitch was especially hard to take in. Djalo, who replaced an injured Steven Lenhart in the starting lineup two weeks ago, had formed a great partnership with Chris Wondolowski at forward, and the Quakes offense, moribund for the first half of the season, was finally showing signs of life.

San Jose has scored six times in two games -- it had only 17 goals in the first 17 games of 2014 -- as head coach Mark Watson employed a different tactical look on offense. The ubiquitous target forward of the past few seasons seemed a thing of the past, and the ground attack Quakes were pressuring teams into submission. A 5-1 demolition of the Chicago Fire got things started, but it was Saturday's step-it-up performance against first place Seattle Sounders that gave supporters a glimpse of what these Earthquakes were capable of.

But the good times have perhaps been put on hold, as Djalo, a key force for San Jose after finally settling in as a second forward, could miss a couple weeks with what Watson described as a probable quad strain. Djalo had a similar injury earlier this season and was at times unavailable or ineffectual. Now, the Earthquakes will have to adjust their lineup once again in Djalo's absence.

Alleviating some of the disruption Djalo's injury has caused is the soon to be available Argentine creative midfielder Matias Perez Garcia, who is expected to have his International Transfer Certificate completed this week. Not a like-for-like swap for Djalo, Perez Garcia is more a suited to playing in the midfield, preferably on the right-hand side. His runs on the sideline are punctuated by cutbacks into the center of the field. In the current starting eleven, Perez Garcia, when available, looks set to supplant incumbent Atiba Harris at right midfielder.

So who replaces Djalo?

Perhaps the aforementioned Harris slides into the second forward role along side Wondolowski. That pairing, with Harris shifted more to the right, would instantly appear to be a return to the target forward strategy that has been decried by fans and the Earthquakes front office alike. However, in that formation, it is probable that Harris and Perez Garcia would swap places on a ongoing basis during the course of the game. In that arrangement, the Quakes would be playing with essentially five midfielder and only one forward. Now, Wondolowski wouldn't be left on an island up top, rest assured; he would just have a revolving door policy for his partner.

Another option comes with the increased health of homegrown signing Tommy Thompson. The 18-year old midfielder has been getting steady time on loan with Sacramento Republic FC, and he played very well in a 45 minute shift against Atletico Madrid for the Earthquakes. Watson stated after that game that he felt Thompson was almost ready to go, and on Saturday against the Sounders, the youngster was included on the bench. Perhaps, Thompson replaces Djalo as a second forward in the Quakes starting eleven. 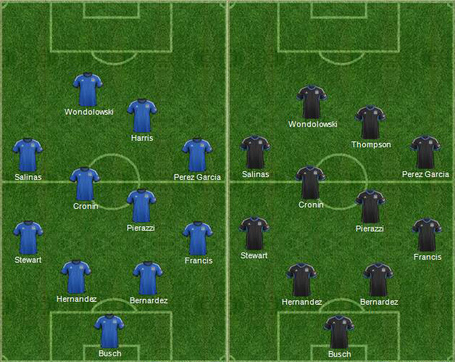 What makes the most sense for the Earthquakes? Bring in the Thompson kid, or go with the in-form Harris as a second forward? Vote for "Blue" or "Black" in the comments below.