When I saw The Mane Land's attempt at banter, I figured they were due for something in return. Then it turns out it is literally impossible to hate Kaká.

Because the Orlando City media guy will inform you that while he may be "Kaká" to the world, he's just "Ricky" to teammates and coaches, a diminutive form of his given "Ricardo." Because when you walk into the hotel conference room off of Santana Row it turns out he's even taller and more handsome than you thought he was going to be.

Because when he was called back into the Brazil team after a brief absence, more than a decade after his debut, he said he was so happy that "it was like my first call-up."

Because he decided a yellow card was totally worth it to pull on teammate Kevin Molino's jersey after scoring a goal last week because Molino just went down for the season with an ACL injury and Ricky figured he could use some love.

"I tried to score because I wanted to do that for Kevin. He's a very nice guy. I think he deserved a celebration like that."

Wait did he just suggest he tried to score simply to put a smile on that dude's face? Awesome.

He won't even get drawn into complaining about defenders taking cheap shots or fouling him hard, saying "I never had any defender or marker that was unfair. It’s normal. But if they mark me, probably one of our players will be free." There's a lot of that, emphasis on his teammates. Brek Shea? "Brek is an amazing player, he has a lot of quality." Cyle Larin? "He is growing so fast. He's got quality. He's working hard...he's going to help a lot in this league"

Unsurprisingly, Ricky confirmed MLS's stylistic reputation: "Yes, yes, it's more physical. The technical level is lower, but physically it's one of the best." Just in case you thought that was an insult, he clarified that physicality had nothing to do with hard tackles: "No, no, just the running, the work, the physical training, it's very good." 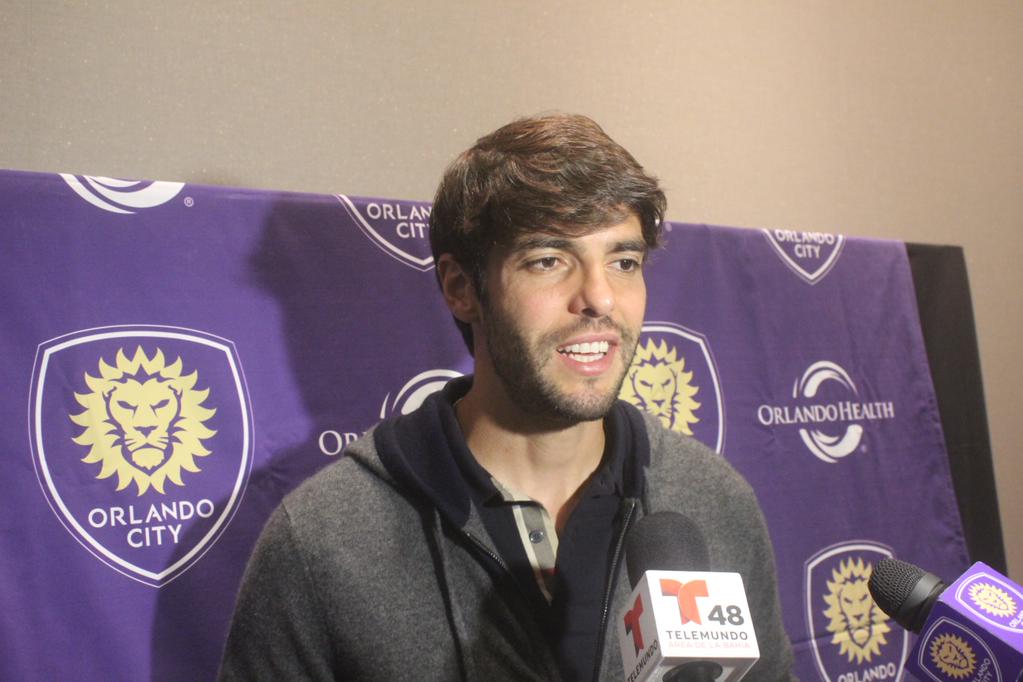 Oh did I mention all those questions were answered in English, sans interpreter, despite the fact that he's a native Portuguese speaker and near-native Italian one? It gets better, though, when the Telemundo boys move in and you realize that his Spanish is even better than his English.

Those are the things he tells you. What he doesn't tell you is about his accomplishments, which are literally without peer amongst active footballers: Ballon d'Or, FIFA World Player of the Year, UEFA Champions league winner, La Liga winner, Serie A winner, and winner of some local rec competition called the World Cup. He even managed to find humor in the traumatic "Miracle in Istanbul" loss to Liverpool in 2004, saying "well we won the first half 3-0!"

I did, however, manage to find two flaws. When I asked him if he had watched any tape of San Jose and what he might've seen from them, he sheepishly admitted that it wasn't until the day before the game they'd watch the coach's film, "But I know they are playing well, they're 4th in the table, so they're probably doing a great job." Hate the man because the former best player on earth isn't watching every minute of film, at 33 years old, of your beloved San Jose Earthquakes, trying to unpick the enigmatic lock that is Dom Kinnear.

He was also the man-of-the-match in the 2009 Confederations Cup final against the United States, breaking the American's hearts by keying a comeback from 2-0 down at the half. For Brazil, they probably don't even remember that trophy. For the United States, on the other hand, it would've been the greatest trophy ever won in the nations history, and it's not close. Could Ricky not afford us that much?

There you have it. Hate the man for those two flaws. Or don't, and prove that as a fan base, we're better than that.