In the waning moments of the first half, Shea Salinas slipped on the grass while making a tackle on FC Dallas defender Zach Loyd and went in studs up. Referee Chris Penso ejected Salinas from the game with a straight red card, and the San Jose Earthquakes played the rest of the game a man down.

Maciek Gudrymowicz, along with Joe Nuxoll and Lyndsay Radnedge, is one of the three excellent photographers that shoots for Center Line Soccer. His photo gallery of the San Jose Earthquakes 2-1 victory over FC Dallas can be viewed here. 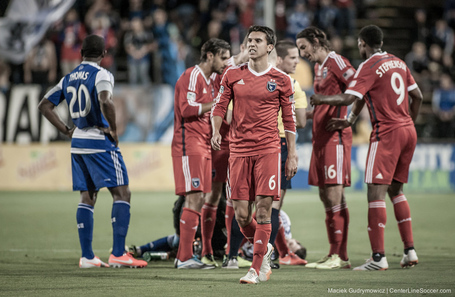